The law of demand

Demand: is the total amount of goods and services that consumers are willing and able to purchase at a given price in a given time period.

The Law of Demand: states that "as the price of a product falls, the quantity demanded of the product will usually increase, ceteris paribus".

Demand curve: represents the relationship between the price and the quantity demanded of a product, ceteris paribus. 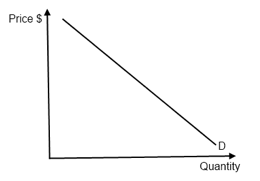 The non-price determinants of demand (shifting) for normal & inferior goods:

Movements along and shifts of the demand curve

Movement along the demand curve:

Figure 1.2 - Movement along and a shift of the demand curve