9.1.1 Draw and label plan diagrams to show the distribution of tissues in the stem and leaf of a dicotyledonous plant. 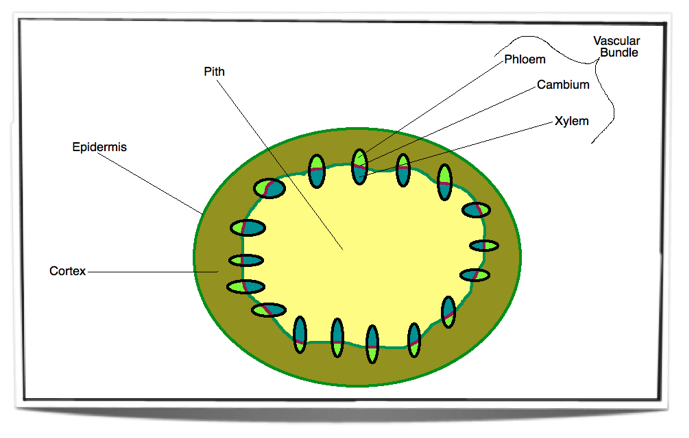 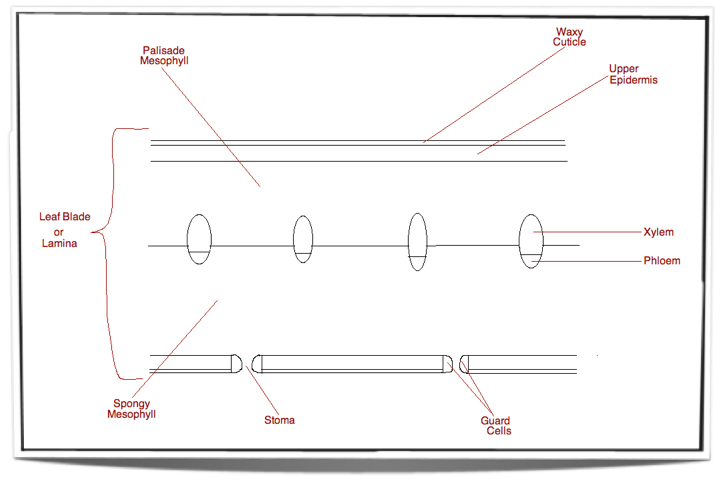 9.1.2 Outline three differences between the structures of dicotyledonous and monocotyledonous plants.

9.1.3 Explain the relationship between the distribution of tissues in the leaf and the functions of these tissues.

Palisade mesophyll - Consists of tightly packed cylindrical cells. This tissue contains many chloroplasts as it is the main photosynthetic tissue. It is found on the upper half of the leaf (upper surface) where the light intensity is the greatest.

Spongy mesophyll - Made up of loosely packed cells. This tissue is found in the lower half of the leaf (lower surface) and has few chloroplasts. It provides gas exchange (CO2 uptake and O2release) and therefore needs to be close to the stomata found in the lower epidermis.

Vascular tissue - Consists of xylem and phloem which are found in the veins of the leaf. The veins in the leaf are positioned in the middle so that all the cells are in close contact with the vascular tissue. The xylem consists of xylem vessels (dead structure) which are long and tubular and transports water into the leaf to replace the water that has been lost through transpiration. The phloem is made up of living cells with pores in between them. It transports the products of photosynthesis out of the leaf.

Bulbs: These are modified leaf bases which serve as food storage and thereby enable the plant to survive adverse conditions.These leaf bases may look like scales or they may extend over and encircle the centre of the bulb (onion). At the base of the bulb, a modified stem can be seen. Roots grow from the underside of the base while the new stems and leaves arise from the upper side of the base. An example of a bulb is an onion bulb. 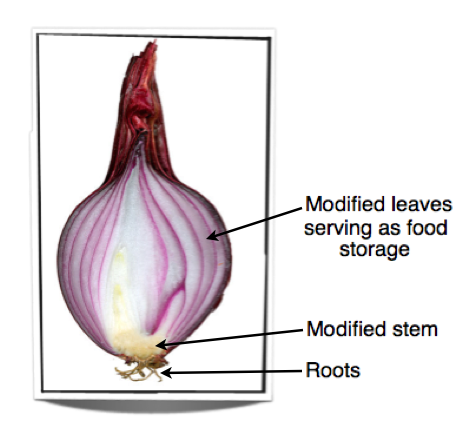 Stem Tubers: These are modified stems which serve as food storage. The stem extends into the ground and forms enlarged, swollen structures which we call stem tubers. Stem tubers are used to store nutrients and therefore allow the plant to survive winter as well as other adverse conditions. They also serve as a mean of asexual reproduction as new plants develop from these stem tubers. An example of a stem tuber is a potato. 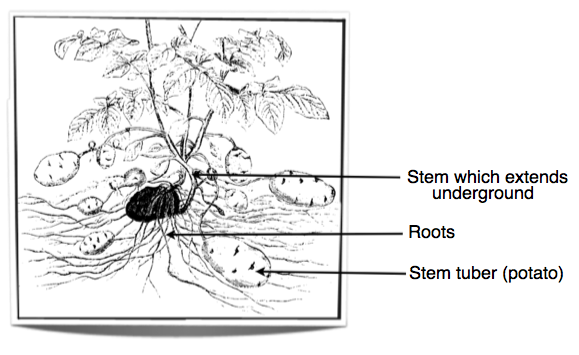 Storage Roots: These are modified roots which serve as food storage. They also allow the plant to survive adverse conditions. An example of a storage root is a carrot. 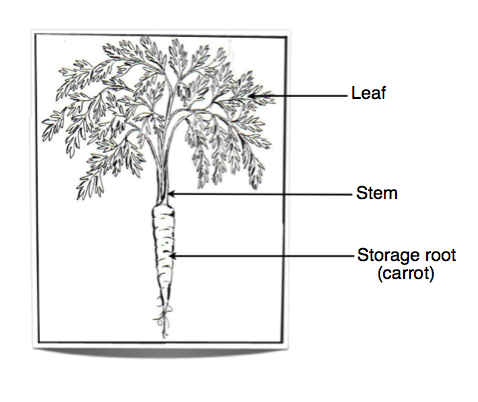 Tendrils: These are modified leaves. They are slim and provide attachment as well as support. In doing so they allow plants to climb upwards. They will rotate in the air until they reach a solid structure to which they can attach to. An example of plants with tendrils are grape vines. 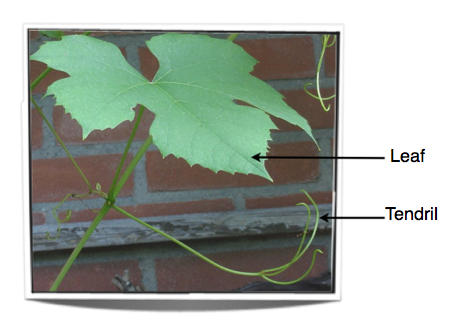 9.1.5 State that dicotyledonous plants have apical and lateral meristems.

9.1.6 Compare growth due to apical and lateral meristems in dicotyledonous plants.

The plant meristem is a type of tissue found at several locations on plants. This tissue is composed of cells which are totipotent. This means that these cells are able to divide and make all the types of cells of that particular plant at any given time. Meristem tissue allows continuous growth and the formation of new organs. Apical meristems are found at the tips of roots and shoots. The apical meristem is responsible for the elongation of roots and stems. It allows the stem to grow taller and the roots to increase in length. Also, the shoot apical meristem allows the formation of new leaves and flowers. The growth in height of the stem is important for photosynthesis while the lengthening of the roots is important for the plant to anchor deep into the soil and it is also vital for the uptake of water and nutrients found in deeper soil layers. The growth taking place at apical meristems is called primary growth. In addition, plants also grow by increasing the diameter of their stems and roots. This is called secondary growth and is a result of cell devision in the lateral meristems. It allows extra xylem and phloem tissue production and it also provides stability for the plant to grow taller.

9.1.7 Explain the role of auxin in phototropism as an example of the control of plant growth.

Tropisms are directional movement responses which occur due to external environmental stimuli. The direction of the stimulus affects the direction of movement. Tropisms can either be negative or positive. Positive tropisms are the directional movement towards the stimulus while negative tropisms are the directional movement away from the stimulus. Examples of stimuli causing tropisms in plants are gravity and light. Roots will grow towards gravity while the plant shoot will grow upwards in the opposite direction. The directional movement of plants in response to light is called phototropism. As seen with gravity, the plant's roots will grow away from the light, into the soil (negative phototropism) while the plant shoot will grow towards the light (positive phototropism). Positive phototropism seen at the tips of plant shoots is made possible due to plant hormones called auxins. Auxins are produced at the tips of plant shoots and then translocate to the darker side of the shoot tip and stem which is receiving less light. This translocation is made possible via auxin efflux carriers which are unevenly distributed in the plant tissue. Once auxins reach the shaded side of the plant, they cause the elongation of cells so that the shaded side grows faster than the brighter side, thereby promoting the bending of the plant shoot towards the light. Auxins do so by binding to auxin receptors on cells. The binding of auxin causes the transcription of certain genes within those cells and therefore the production of specific proteins which affect growth. Auxins allow the expelling of protons (hydrogen ions) into the cell walls of the cells on the shaded side, decreasing the pH inside the cells and in doing so activate specific enzymes which break down cellulose microfibrils within the cell wall. This loosens the cell wall and allows cell elongation. So to conclude, auxins are very important in the control of plant growth towards the light and thereby allow the plant to increase its rate of photosynthesis.