8.2.1 Draw and label a diagram showing the structure of a chloroplast as seen in electron micrographs. 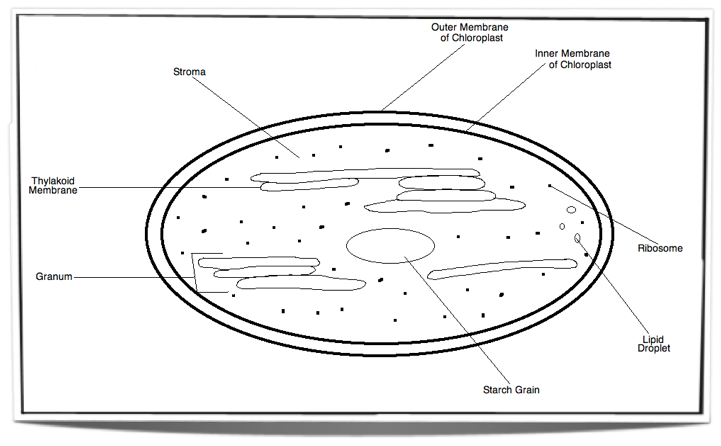 8.2.2 State that photosynthesis consists of light-dependent and light- independent reactions.

The light-dependent reactions starts within Photosystem II. When the excited electron reaches the special chlorophyll molecule at the reaction centre of Photosystem II it is passed on to the chain of electron carriers. This chain of electron carriers is found within the thylakoid membrane. As this excited electron passes from one carrier to the next it releases energy. This energy is used to pump protons (hydrogen ions) across the thylakoid membrane and into the space within the thylakoids. This forms a proton gradient. The protons can travel back across the membrane, down the concentration gradient, however to do so they must pass through ATP synthase. ATP synthase is located in the thylakoid membrane and it uses the energy released from the movement of protons down their concentration gradient to synthesise ATP from ADP and inorganic phosphate. The synthesis of ATP in this manner is called non-cyclic photophosphorylation (uses the energy of excited electrons from photosystem II) .

If the light intensity is not a limiting factor, there will usually be a shortage of NADP+ as NADPH accumulates within the stroma (see light independent reaction). NADP+ is needed for the normal flow of electrons in the thylakoid membranes as it is the final electron acceptor. If NADP+ is not available then the normal flow of electrons is inhibited. However, there is an alternative pathway for ATP production in this case and it is called cyclic photophosphorylation. It begins with Photosystem I absorbing light and becoming photoactivated. The excited electrons from Photosystem I are then passed on to a chain of electron carriers between Photosystem I and II. These electrons travel along the chain of carriers back to Photosystem I and as they do so they cause the pumping of protons across the thylakoid membrane and therefore create a proton gradient. As explained previously, the protons move back across the thylakoid membrane through ATP synthase and as they do so, ATP is produced. Therefore, ATP can be produced even when there is a shortage of NADP+.

In addition to producing NADPH, the light dependent reactions also produce oxygen as a waste product. When the special chlorophyll molecule at the reaction centre passes on the electrons to the chain of electron carriers, it becomes positively charged. With the aid of an enzyme at the reaction centre, water molecules within the thylakoid space are split. Oxygen and H+ ions are formed as a result and the electrons from the splitting of these water molecules are given to chlorophyll. The oxygen is then excreted as a waste product. This splitting of water molecules is called photolysis as it only occurs in the presence of light.

Photophosphorylation is the production of ATP using the energy of sunlight. Photophosphorylation is made possible as a result of chemiosmosis. Chemiosmosis is the movement of ions across a selectively permeable membrane, down their concentration gradient. During photosynthesis, light is absorbed by chlorophyll molecules. Electrons within these molecules are then raised to a higher energy state. These electrons then travel through Photosystem II, a chain of electron carriers and Photosystem I. As the electrons travel through the chain of electron carriers, they release energy. This energy is used to pump hydrogen ions across the thylakoid membrane and into the space within the thylakoid. A concentration gradient of hydrogen ions forms within this space. These then move back across the thylakoid membrane, down their concentration gradient through ATP synthase. ATP synthase uses the energy released from the movement of hydrogen ions down their concentration gradient to synthesise ATP from ADP and inorganic phosphate.

The light-independant reactions of photosynthesis occur in the stroma of the chloroplast and involve the conversion of carbon dioxide and other compounds into glucose. The light-independent reactions can be split into three stages, these are carbon fixation, the reduction reactions and finally the regeneration of ribulose bisphosphate. Collectively these stages are known as the Calvin Cycle.

During carbon fixation, carbon dioxide in the stroma (which enters the chloroplast by diffusion) reacts with a five-carbon sugar called ribulose bisphosphate (RuBP) to form a six-carbon compound. This reaction is catalysed by an enzyme called ribulose bisphosphate carboxylase (large amounts present within the stroma), otherwise known as rubisco. As soon as the six-carbon compound is formed, it splits to form two molecules of glycerate 3-phosphate. Glycerate 3-phosphate is then used in the reduction reactions.

The regeneration of RuBP is essential for carbon fixation to continue. Five triose phosphate molecules will undergo a series of reactions requiring energy from ATP, to form three molecules of RuBP. RuBP is therefore consumed and produced during the light-independent reactions and therefore these reactions form a cycle which is named the Calvin cycle.

8.2.6 Explain the relationship between the structure of the chloroplast and its function.

The stroma - Contains many enzymes, including rubisco, which are important for the reactions of the Calvin cycle.

The thylakoids - Have a large surface area for light absorption and the space within them allows rapid accumulation of protons.

8.2.7 Explain the relationship between the action spectrum and the absorption spectrum of photosynthetic pigments in green plants.

8.2.8 Explain the concept of limiting factors in photosynthesis, with reference to light intensity, temperature and concentration of carbon dioxide.