4.2.1 State that meiosis is a reduction division of a diploid nucleus to form haploid nuclei.

Meiosis is a reduction division of a diploid nucleus to form haploid nuclei.

Homologous chromosomes: chromosomes with the same genes as each other, in the same sequence but do not necessarily have the same allele of those genes.

4.2.3 Outline the process of meiosis, including pairing of homologous chromosomes and crossing over, followed by two divisions, which results in four haploid cells.

Meiosis involves two divisions. Meiotic cells have an interphase stage before the start of meiosis I which is similar to mitosis. It includes G1, S and G2 phases. (See notes on mitosis) After meiosis I there is another brief interphase stage which is followed by meiosis II.

Meiosis I
The first stage of meiosis I is prophase I. In prophase I the chromosomes pair up so that the chromosomes in each pair are homologous. Once the homologous chromosomes are paired up, crossing over occurs. Crossing over is the exchange of genetic material between non-sister chromatids. The nuclear membrane also starts to break down and the spindle microtubules stretch out from each pole to the equator.

The second stage is metaphase I. Here the paired up homologous chromosomes line up at the equator and the spindle fibbers attach to the chromosomes in a way that ensures that for each homologous pair, one chromosome moved to one pole and the other moves to the opposite pole.

The third stage is anaphase I. This is the stage where the homologous chromosomes are separated and pulled to opposite poles. This halves the chromosome number however each chromosome is still composed of two sister chromatids. The cell membrane starts to prepare for its separation at the equator to form two cells.

The fourth stage is telophase I. Here each chromosome from the homologous pair are found at opposite poles and the nuclear membrane reforms around each daughter nucleus. The membrane then divides through citokinesis.

There is a brief interphase stage before the start of meiosis II. This stage does not include the S phase.

Meiosis II
The first stage of meiosis II is prophase II. Here the cell has divided into two daughter haploid cells however the process does not end here as these two cells immediately start to divide again. The spindle microtubules stretch out from each pole again and the nuclear membrane breaks down as in prophase I.

The second stage is metaphase II. Here the chromosomes in each cell line up at the equator and the spindle microtubules attach to the centromere of each chromosome.

The fourth stage is telophase II. Here the nuclear membrane reforms around the four sets of daughter chromosomes. Cytokinesis then follows to divide the cytoplasm of the two cells and so the result is four daughter cells each with a haploid set of chromosomes. 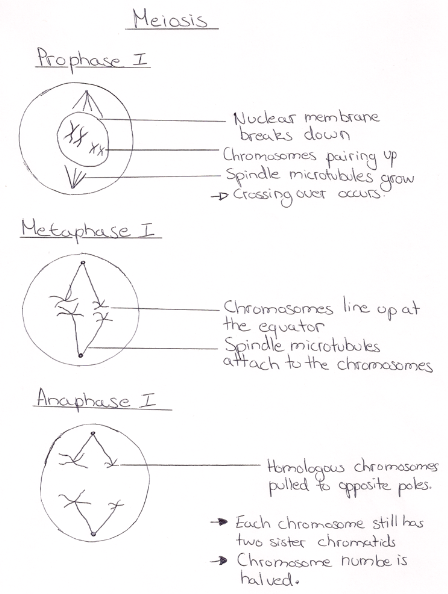 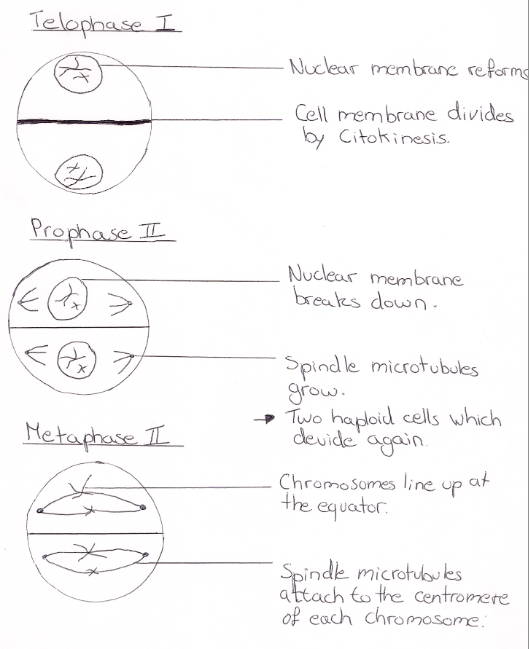 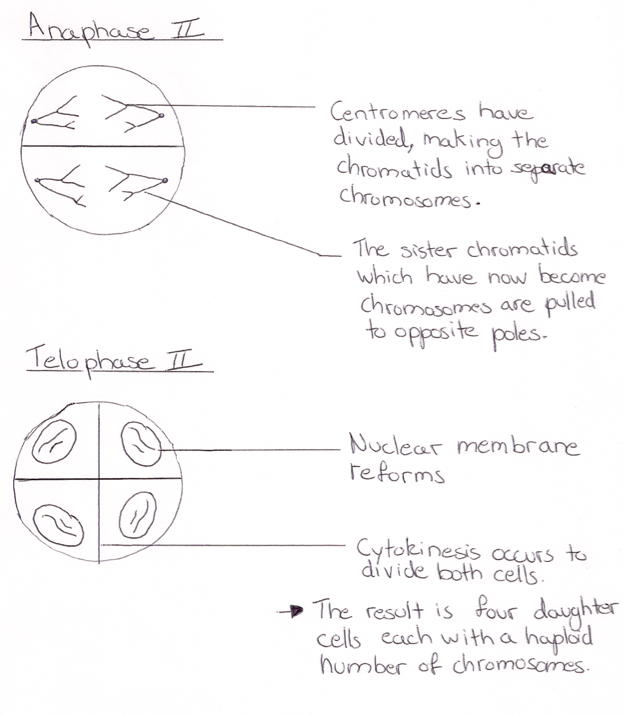 4.2.4 Explain that non-disjunction can lead to changes in chromosome number, illustrated by reference to Down syndrome (trisomy 21).

A number of problems can arise during meiosis. A common problem is non-disjunction. This is when the chromosomes do not separate properly during meiosis, either in meiosis I  (in anaphase I) or meiosis II (in anaphase II). This leads the production of gametes that either have a chromosome too many or too few. Gametes with a missing chromosome usually die quite fast however gametes with an extra chromosome can survive. When a zygote is formed from the fertilization of these gametes with an extra chromosome, three chromosomes of one type are present instead of two. An example of this is Down syndrome. Down syndrome is a disease in which the chromosomes failed to separate properly during meiosis leading to three chromosomes of type 21 instead of two. A person with the condition therefore has a total of 47 chromosomes instead of 46. The non-disjunction can take place either in the formation of the egg or the sperm. Down syndrome leads to many complications and also the risk of having a child with the condition increases with age.

Below is a diagram illustrating a non-disjunction: 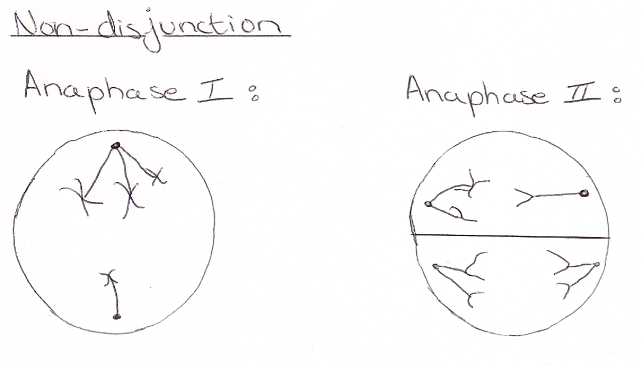 4.2.5 State that, in karyotyping, chromosomes are arranged in pairs according to their size and structure.

In karyotyping, chromosomes are arranged in pairs according to their size and structure.

4.2.6 State that karyotyping is performed using cells collected by chorionic villus sampling or amniocentesis, for pre-natal diagnosis of chromosome abnormalities.

4.2.7 Analyse a human karyotype to determine gender and whether non- disjunction has occurred.

Below are two images of a karyotype. The first one is of a normal healthy male patient as on the karyotype there are two chromosomes for each chromosome number and a Y chromosome is present. The second image shows the karyotype a person with Down’s syndrome would get. 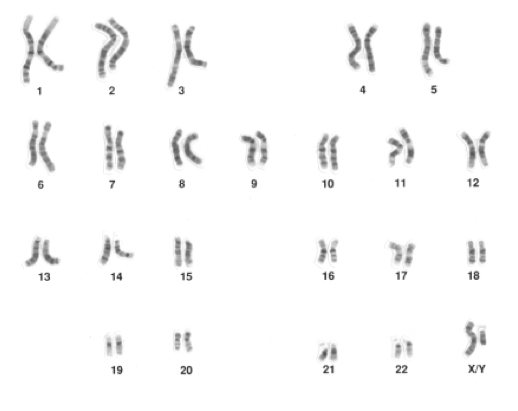 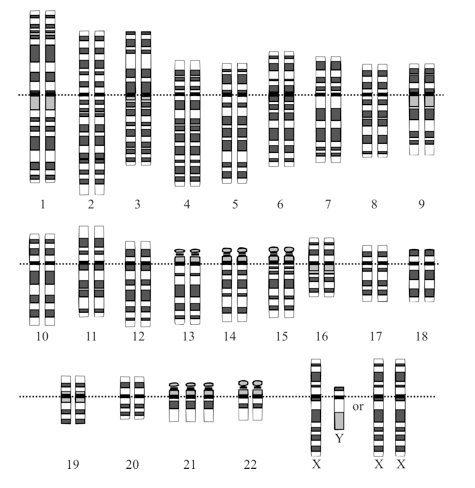