10.1.1 Describe the behaviour of the chromosomes in the phases of meiosis.

Two divisions occure during meiosis, these are termed meiosis I and meiosis II. Each division involves the four stages of prophase, metaphase, anaphase and telophase. 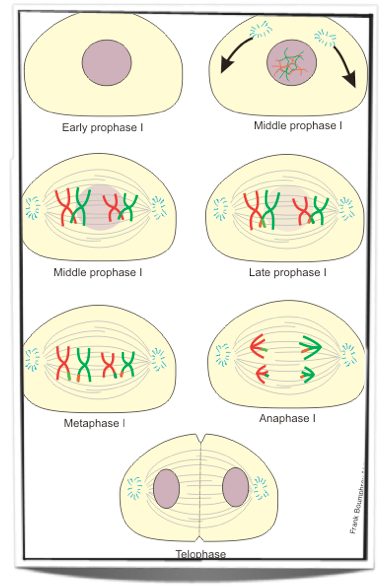 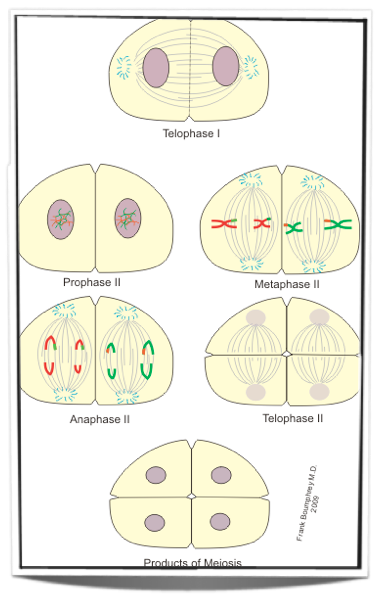 10.1.2 Outline the formation of chiasmata in the process of crossing over.

10.1.3 Explain how meiosis results in an effectively infinite genetic variety in gametes through crossing over in prophase I and random orientation in metaphase I.

Two processes result in the infinite genetic variety in gametes. These are crossing over in prophase I and the random orientation of chromosomes in metaphase I.

Crossing over is important for genetic variety as it allows the exchange of genetic material between the maternal and paternal chromosomes. This forms chromatids with new combinations of alleles (recombination of linked genes). The chromatids which have a combination of allele different to that of either parent are called recombinants. It is also important to note that crossing over occures at a random point and more than one chiasma can form per homologous pair. This means that meiosis can result in almost an infinite amount of genetic variety.

The random orientation of homologous chromosomes at the equator in metaphase I also plays a vital role in genetic variety. Since the homologous pairs of chromosomes are orientated randomly at the equator, either maternal or paternal homolgue can orient towards either pole. The number of possible orientations is equal to 2 raised to the power of the number of chromosome pairs. For example, for a haploid number of n, 2n is the number of possible outcomes. Humans have a haploid number of 23. 223 gives a value of over 8 million. This means that there are over 8 million possible combinations just through the radom orientation of the homologous chromosmes. If we add the effects of crossing over, the number of combinations increases even further. Therfore, these two processes allow infinit genetic variety in gametes.

Allele pairs seperate independently during gamete formation which means that the transmission of traits to offspring are independent to one another.

10.1.5 Explain the relationship between Mendel?s law of independent assortment and meiosis.