Species: a group of organisms that can interbreed and produce fertile offspring.

Habitat: the environment in which a species normally lives or the location of a living organism.

Population: a group of organisms of the same species who live in the same area at the same time.

Community: a group of populations living and interacting with each other in an area.

Ecosystem: a community and its abiotic environment.

5.1.2 Distinguish between autotroph and heterotroph.

5.1.3 Distinguish between consumers, detritivores and saprotrophs.

Consumer: an organism that ingests other organic matter that is living or recently killed.

Saprotroph: an organism that lives on or in non-living organic matter, secreting digestive enzymes into it and absorbing the products of digestion.

5.1.4 Describe what is meant by a food chain, giving three examples, each with at least three linkages (four organisms).

A food web is a diagram that shows all the feeding relationships in a community with arrows which show the direction of the energy flow.

5.1.7 Deduce the trophic level of organisms in a food chain and a food web. 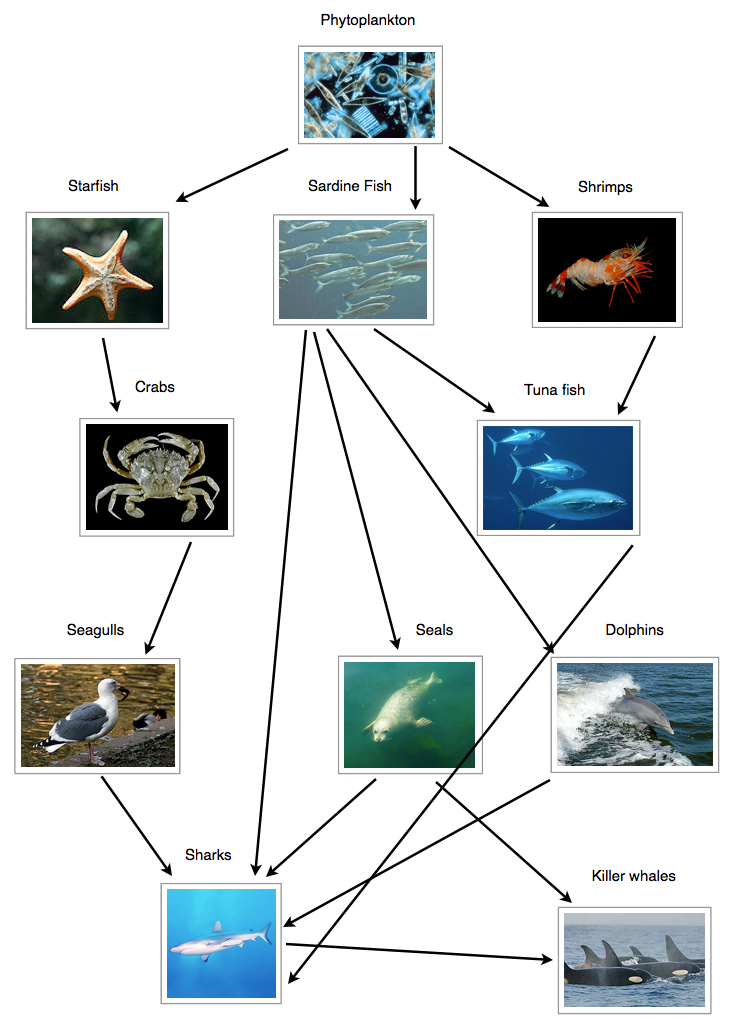 5.1.9 State that light is the initial energy source for almost all communities.

Light is the initial energy source for almost all communities.

5.1.12 Explain reasons for the shape of pyramids of energy.

5.1.13 Explain that energy enters and leaves ecosystems, but nutrients must be recycled.

Energy is not recycled. It is constantly being supplied to ecosystems through light energy and then flows through the trophic levels. As it flows through the trophic levels energy is lost in feces, tissue loss and death. This energy from these losses is passed on to detritivores and saprotrophs. However the energy is then lost from the ecosystem as the remaining energy in the trophic levels and the energy in the saprotrophs and detritivores is lost through cell respiration in the form of heat. As a result, energy needs to be constantly supplied to the ecosystems. Nutrients on the other hand are different as they constantly have to be recycled. Carbon, nitrogen and phosphorus are all examples of nutrients. There is only a limited supply of these as they are not resupplied to the ecosystems like energy. Therefor they have to be recycled over and over. They are absorbed from the environment, used by living organisms and then returned to the environment.