8.1.2 Outline the process of glycolysis, including phosphorylation, lysis, oxidation and ATP formation. 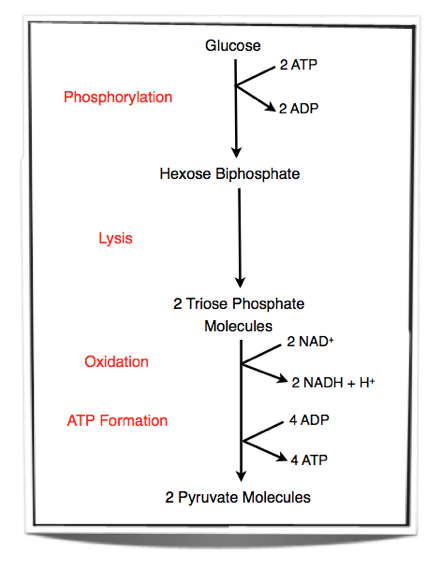 8.1.3 Draw and label a diagram showing the structure of a mitochondrion as seen in electron micrographs. 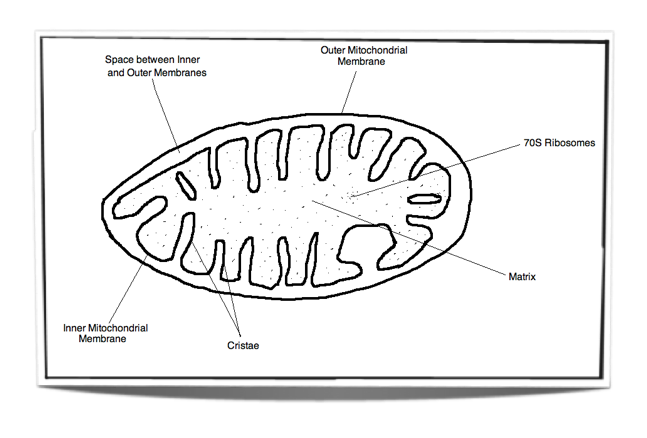 Figure 8.1.2 - Labelled diagram of a mitochondrion

8.1.4 Explain aerobic respiration, including the link reaction, the Krebs cycle, the role of NADH + H+, the electron transport chain and the role of oxygen.

Mitochondria in cells take up the pyruvate which is formed from glycolysis in the cytoplasm. Once the pyruvate is in the mitochondrion, enzymes within the matrix of the mitochondrion remove hydrogen and carbon dioxide from the pyruvate. This is called oxidation (removal of hydrogen or addition of oxygen) and decarboxylation (removal of carbon dioxide). Therefore, the process is called oxidative decarboxylation. The hydrogen removed is accepted by NAD+. The link reaction results in the formation of an acetyl group. This acetyl group is then accepted by CoA and forms acetyl CoA. 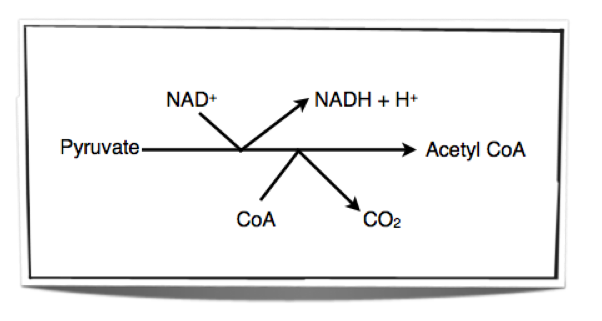 Step 4 - The four carbon compound then undergoes substrate-level phosphorylation and during this reaction it produces ATP. Oxidation also occurs twice (2 hydrogens are removed). The one hydrogen is accepted by NAD+ and forms  NADH + H+. The other is accepted by FAD and forms FADH2.  The four carbon compound is then ready to accept a new acetyl group and the cycle is repeated.

The carbon dioxide that is removed in these reactions is a waste product and is excreted from the body. The oxidations release energy which is then stored by the carriers when they accept the hydrogen. This energy is then later on used by the electron transport chain to produce ATP. 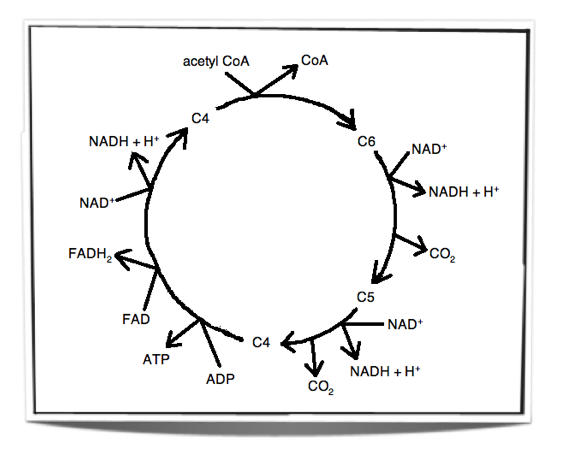 Inside the inner membrane of the mitochondria there is a chain of electron carriers. This chain is called the electron transport chain. Electrons from the oxidative reactions in the earlier stages of cell respiration pass along the chain. NADH donates two electrons to the first carrier in the chain. These two electrons pass along the chain and release energy from one carrier to the next. At three locations along the chain, enough energy is released to produce ATP via ATP synthase. ATP synthase is an enzyme that is also found in the inner mitochondrial membrane. FADH2 also donates electrons but at a later stage than NADH. Also, enough energy is released at only two locations along the chain by electrons from FADH2. The ATP production relies on energy release by oxidation and it is therefore called oxidative phosphorylation. 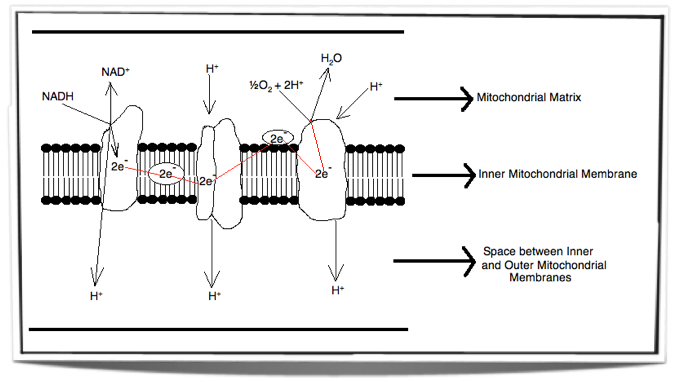 The Role of Oxygen

Oxygen is important for cell respiration as at the end of the electron transport chain, the electrons are donated to oxygen. This occurs in the matrix at the surface of the inner membrane. At the same time oxygen binds with hydrogen ions and forms water.
If there is no oxygen then electrons can no longer pass through the electron transport chain and NADH + H+ can no longer be reconverted into NAD+. Eventually NAD+ in the mitochondrion runs out and therefore the link reaction and Krebs cycle no longer take place. 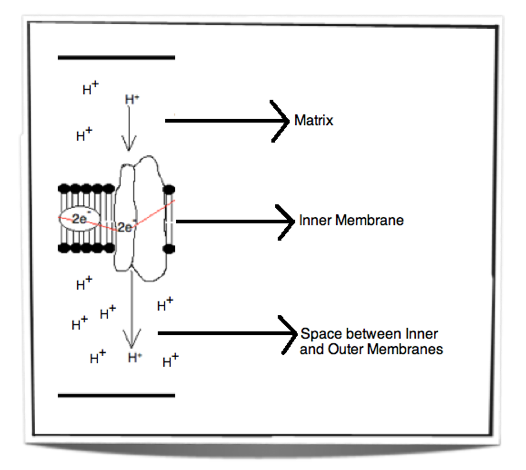 Figure 8.1.6 shows the movement of protons from the matrix into the space between the inner and outer membranes. This creates a concentration gradient. The energy used to pump these protons across the inner membrane comes from the energy released by the electrons passing through the electron transport chain.

The protons then move down the concentration gradient from the space between the inner and outer membranes back into the matrix. However, they can only move back across via an enzyme embedded in the inner membrane. This enzyme is called ATP synthase. The protons are transported back into the matrix through the channels of ATP synthase and as they do so they release energy. This energy is then used by ATP synthase to convert ADP into ATP. Since the electrons come from previous oxidation reactions of cell respiration and the ATP synthase catalyses the phosphorylation of ADP into ATP, this process is called oxidative phosphorylation. Chemiosmosis is necessary for oxidative phosphorylation to work. 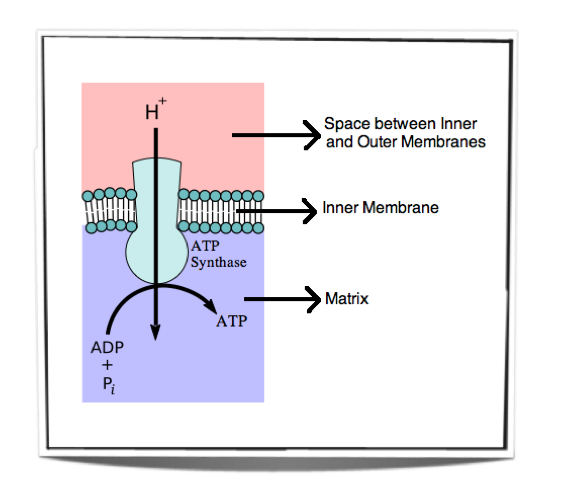 Figure 8.1.7 shows the movement of protons down their concentration gradient. They can only travel through the inner membrane via ATP synthase and as they do so they release energy. This energy is used by ATP synthase to convert ADP into ATP.

8.1.6 Explain the relationship between the structure of the mitochondrion and its function.

Matrix: Watery substance that contains ribosomes and many enzymes. These enzymes are vital for the link reaction and the Krebs cycle.

Inner membrane: The electron transport chain and ATP synthase are found in this membrane. These are vital for oxidative phosphorylation.

Space between inner and outer membranes: Small volume space into which protons are pumped into. Due to its small volume, a high concentration gradient can be reached very quickly. This is vital for chemiosmosis.

Outer membrane: This membrane separates the contents of the mitochondrion from the rest of the cell. It creates a good environment for cell respiration.

Cristae: These tubular projections of the inner membrane increase the surface area for oxidative phosphorylation.